Vascular complications after small-caliber femoral artery access (such as access for coronary angiography and percutaneous coronary intervention) have dramatically decreased over time, from 3.1% in 1998 to 1% in 2007.1 However, they have seemingly resurged because of the so-called radial paradox: a falling familiarity with femoral access techniques resulting from the currently preferred transradial approach.2 Vascular complications after the use of larger-caliber devices are reported to be as high as 2.2% to 7.9% in transcatheter aortic valve implantation and 12% to 22% in endovascular aneurysm repair.3-9 Access site complications are associated with a prolonged hospital stay and increased mortality.10

In terms of the number of attempts, inadvertent venipuncture, and mean time to insertion, puncture guidance with real-time ultrasound outperforms fluoroscopy or reliance on anatomic landmarks.11 The unique ability to differentiate between veins and arteries, identify specific arterial anatomic features (eg, the exact location of the femoral bifurcation and the epigastric artery), appreciate obstructive and/or calcified atherosclerotic disease, and monitor the needle vessel entry in real time has galvanized the adoption of ultrasound for optimizing the arterial access technique.12 Ultrasound is also readily available and precludes radiation exposure. After a steep learning curve, ultrasound-guided access is an easy technique to adopt.11

At the conclusion of a procedure, closure devices are most successful when proper access site management has been ensured. Therefore, this article features step-by-step tutorials for ultrasound-guided access of the common femoral artery and the axillary artery (Table 1). 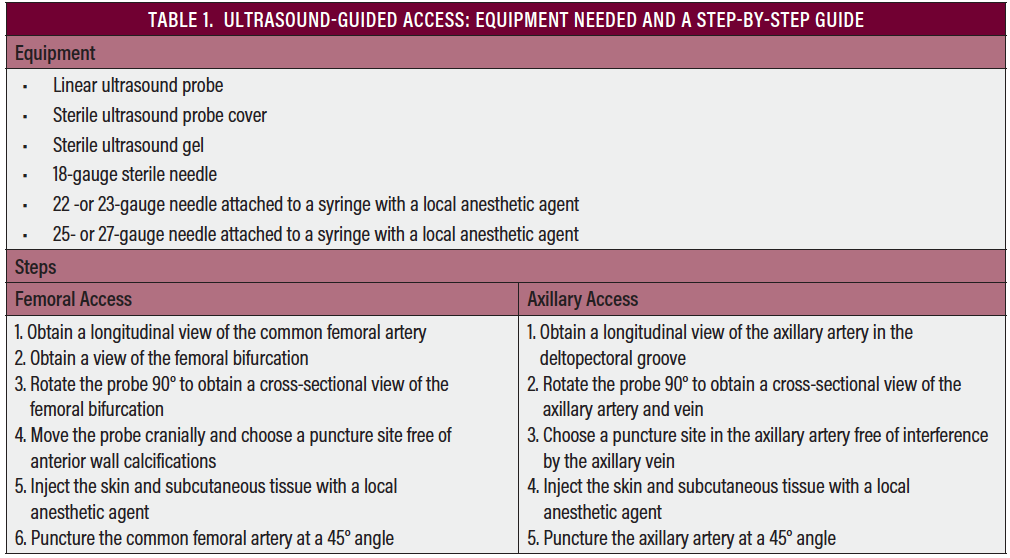 The proximal transition of the common femoral artery to the external iliac artery is defined by the inguinal ligament and the origin of the inferior epigastric artery. Distally, the common femoral artery bifurcates into the superficial and deep femoral arteries. Punctures that are too high (ie, cranial to the inferior epigastric artery origin) are within the retroperitoneal space and are at risk for covert retroperitoneal bleeds. Punctures that are too low can affect the deep or superficial femoral artery (causing flow-limiting dissections, aneurysms or pseudoaneurysms, arteriovenous fistulas) and jeopardize leg perfusion. Furthermore, closure device failure may result from improper puncture location, whether too high or too low.

The axillary artery lies in the deltopectoral groove and represents the continuation of the subclavian artery at the height of the lateral margin of the first rib. It continues as the brachial artery after passing the lower margin of the teres major muscle. The regions of interest for axillary artery access are the middle and lateral part of the axillary artery in between the origins of the lateral thoracic artery and the subscapular artery. Punctures medial to the origin of the lateral thoracic artery reside in the thoracic space, such as the bony structure of the humeral head. Punctures here cannot be manually compressed and are associated with consequent risk for a hematothorax or pneumothorax. Punctures that are lateral to the minor pectoral muscle can cause damage to the brachial plexus.

A 5- to 10-MHz linear ultrasound probe, a probe cover, sterile ultrasound gel, a local anesthetic agent, and 18-, 22-, and 25-gauge needles are needed for ultrasound-guided access under sterile conditions. Each probe has a reference marker, which is often a vertical line on the probe. By convention, we recommend starting an ultrasound examination by holding the probe so that the vertical marker is facing upward for the femoral artery (Figure 1) and toward the patient’s chin for the axillary artery (Figure 2). 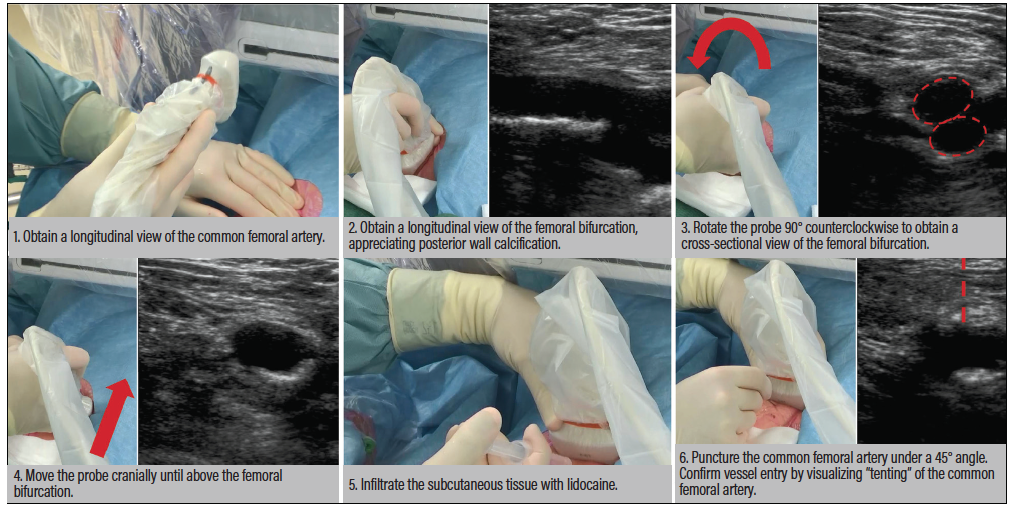 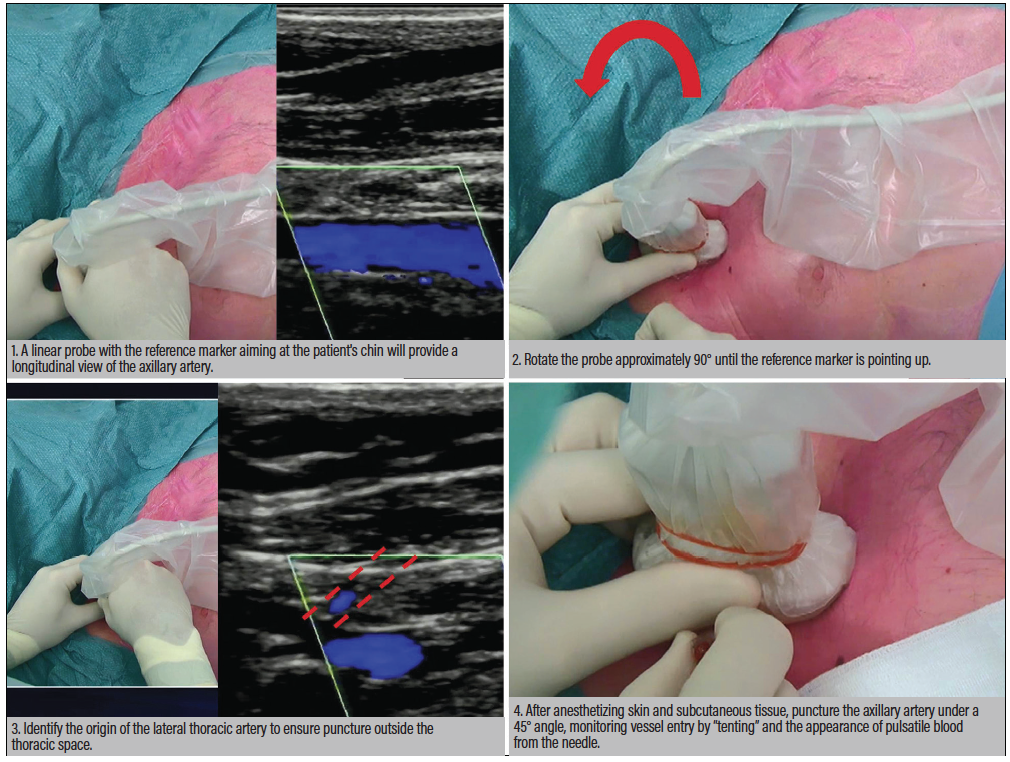 Step two. With the ultrasound probe held with the left hand to offer continuous visual monitoring of the common femoral artery in the short-axis view, a local anesthetic (eg, lidocaine) is injected with the right hand using a small 25- or 27-gauge needle to numb the superficial skin layers. The deeper subcutaneous tissue is anesthetized with a 22- or 23-gauge needle, starting deep around, but not in, the arterial wall and working backward toward the level of the skin. Care should be taken to not inject the anesthetic into the vessel.

Step three. After adequate anesthesia and continuous direct ultrasound vision, an 18-gauge needle is used for arterial puncture at a 45° angle. The needle entry in the designated common femoral artery location is monitored first by “tenting” of the common femoral artery and then by subsequent appearance of pulsatile arterial blood from the needle.

Step one. The linear probe is used to identify the axillary artery in the deltopectoral groove. Holding the linear probe with its vertical reference marker pointing upward will often provide a short-axis view of the arterial structure, and a 90° probe rotation may provide a longitudinal view of the axillary artery. Color Doppler signals can be used to help differentiate the artery from the axillary vein. A proper puncture site is identified, free from anterior interference of the axillary vein. Again, color Doppler or compression can be applied to differentiate between artery and vein.

Step two. The skin and subcutaneous tissue are anesthetized with a local anesthetic agent using a 25- to 27-gauge needle and a 22- to 23-gauge needle, respectively.

Step three. The axillary artery is punctured with an 18-gauge needle at a 45° angle.