Patent foramen ovale (PFO) has been implicated in the causation of cryptogenic stroke, platypnea-orthodeoxia syndrome, decompression sickness, and migraine headache.1,2 The role of PFO closure in patients with cryptogenic stroke has been established in several randomized trials.1 In addition, there is an increasing amount of literature supporting the potential utility of PFO closure in patients with platypnea-orthodeoxia syndrome, for primary prevention in patients undergoing high-risk surgery, or for those with venous thromboembolism.1,3-5 Hence, there is a growing interest in the streamlining and adoption of minimally invasive techniques for PFO closure.

Intracardiac echocardiography (ICE) offers an ideal platform that allows safe and effective minimally invasive PFO closure. Despite that, a nonnegligible proportion of patients still undergo PFO closure under general anesthesia with transesophageal echocardiography (TEE) guidance.6 Unfamiliarity with ICE images and concerns about the additional cost of the ICE catheter may be the main reasons for this persistent trend. In this article, we aim to provide a simplified step-by-step approach to PFO closure with ICE guidance.

STRENGTHS AND LIMITATIONS OF ICE IMAGING

The use of ICE to guide PFO closure has a number of advantages. First, the proximity of the ICE catheter to the interatrial septum allows for excellent imaging of the PFO and its adjacent structures. Second, ICE eliminates the need for general anesthesia and esophageal intubation with the TEE probe, which mitigates the risk of the associated adverse events and significantly reduces the procedure time.7 Because many patients with a PFO are young, reducing radiation exposure is an important advantage of ICE. Third, ICE offers the unique opportunity to complete the PFO closure procedure with a single operator, compared with two to three operators with TEE guidance. Fourth, ICE facilitates better physiologic assessment of the PFO because it allows adequate provocative maneuvers (eg, Valsalva) during microbubble echocardiography.

The use of ICE does, however, come with some limitations. One important issue with ICE is the incremental cost of the ICE catheter, which ranges between $1,800 and $2,400 for single-use catheters and between $600 and $900 for reprocessed ICE catheters. However, the elimination of the costs associated with general anesthesia and professional fees of the additional operators (anesthesiologist and imaging cardiologist) usually offsets the additional cost of the ICE catheter. In a large nationwide study, there was no difference in the total cost of ICE versus TEE-guided interatrial communication closure.6 Other limitations of ICE include its limited far-field imaging (although this is typically not needed for percutaneous PFO closure), the need for an additional venous puncture with its attendant risk of vascular complications, and the expected learning curve associated with early use. Finally, currently available ICE catheters lack meaningful three-dimensional volumetric imaging capabilities, although these are usually not needed for PFO closure.

The majority of ICE catheters used for PFO closure are phased-array catheters.8 The AcuNav (Siemens Healthineers) and ViewFlex Xtra (Abbott Vascular) ICE catheters are the most commonly used systems in clinical practice. The technical properties of these two systems are summarized in Table 1. Mastering the knobology and manipulation of the ICE probe is key to facilitating smooth ICE-guided PFO closure. Both the AcuNav and the ViewFlex Xtra catheters have two key knobs: an anterior-posterior title knob and a right-left title knob. AcuNav has an additional locking knob that allows securing of the probe in the desired location, whereas ViewFlex Xtra features a self-locking mechanism, so it does not contain this additional knob. 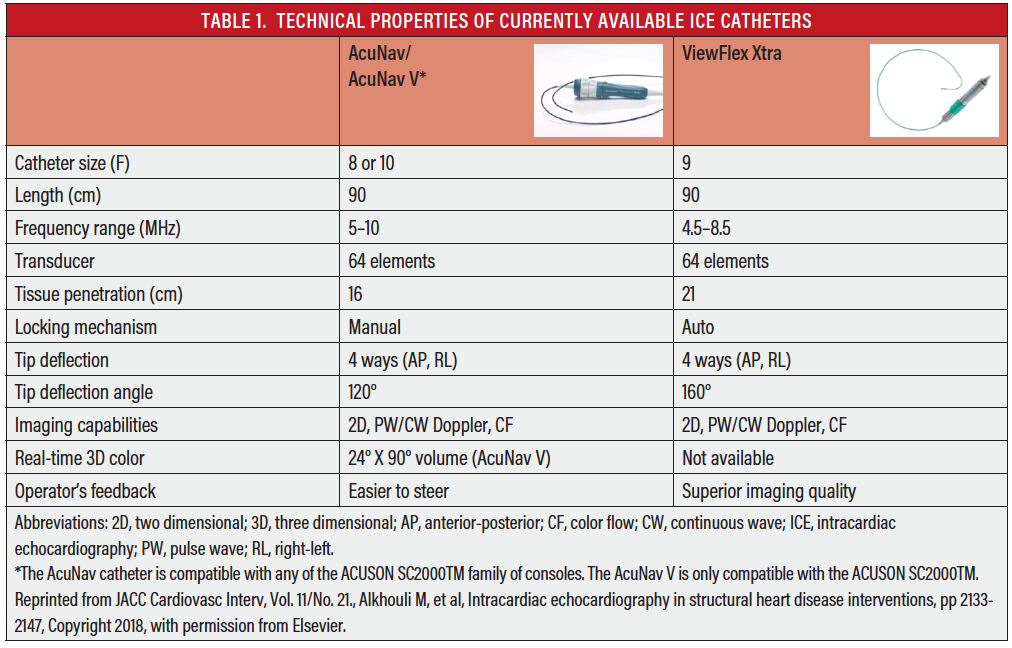 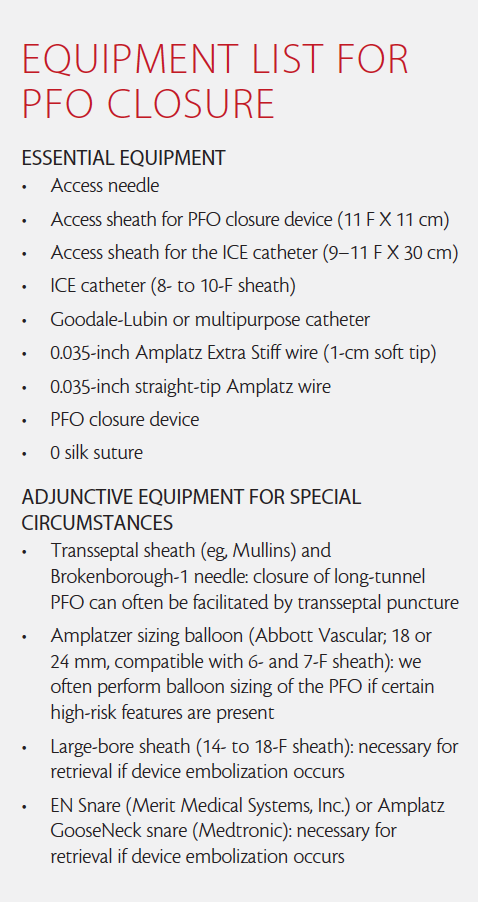 A STEP-BY-STEP APPROACH TO CLOSING A PFO WITH ICE

It is important to implement a standard approach for positioning the ICE console and obtaining the ICE images. We position the console to the left of the caudal-most end of the table, connect it via a special cable to the standard cath lab mounted monitoring screen, and utilize trained nonscrubbed personnel to obtain and store the ICE images. Alternatively, the console can be covered with a sterile sleeve and positioned to the right of the caudal-most end of the table. This allows the scrubbed interventionalist or the assistant to operate the ICE machine throughout the procedure. The equipment needed for a standard PFO closure procedure is listed in the Equipment List for PFO Closure sidebar.

We achieve two venous accesses, typically in the right femoral vein, and we prefer to keep the ICE sheath inferior to the PFO closure device sheath to minimize the device/ICE interaction during the procedure. We advance the ICE catheter under fluoroscopy via a long (30 cm) sheath to avoid manipulation of the catheter in the pelvic veins.

After advancing the ICE catheter to the midright atrium,2 we administer systemic heparin (70–100 U/kg) and proceed with ICE survey of the PFO and the adjacent structures.

• From the midright atrium, a 30° clockwise rotation and a slight anterior tilt will show the home view, which allows a quick evaluation of the tricuspid valve, aortic valve, right ventricular outflow tract, and often the pulmonic valve.

• From the home view, two key views can be obtained to guide PFO closure: (1) the septal (long-axis) view can be obtained by posterior tilting of the ICE probe using the anterior-posterior knob (Figure 1A and 1B); and (2) the aortic (short-axis) view can be obtained by slightly reducing the clockwise rotation of the entire probe and applying a slight right or left tilting using the right-left knob until the tip of the ICE catheter probe is inferior to the aortic valve, just above the tricuspid valve (Figure 1C).

Interrogation of the septum and its adjacent structures in the short- and long-axis views allows a comprehensive survey of certain high-risk features of the PFO that may have important technical implications on the procedure. These high-risk features include the presence of a long PFO tunnel > 8 mm, concomitant atrial septal defect or fenestrated septum, atrial septal aneurysm, thick septum secundum, or prominent Eustachian valve or Chiari network.

We then cross the PFO using a Goodale-Lubin catheter (Medtronic) and a straight Amplatz wire (Cook Medical) in the long-axis view. Under fluoroscopy, we exchange the straight wire with a J-tip Amplatz Extra Stiff wire (Cook Medical), which is then advanced and parked in the left superior pulmonary vein.

We advance the deaired device delivery system over the Amplatz Extra Stiff wire into the left atrium and then remove the Amplatz Extra Stiff wire. The Cardioform septal occluder is typically preloaded into the delivery system, which minimizes the risk of air embolism. However, it is essential to maintain a wet-to-wet connection and avoid deep inspiration when an Amplatzer device is loaded into the delivery system because these situations carry a higher risk of air embolism. Once the device is advanced into the left atrium, the left-sided disc is unsheathed and pulled against the septum (Figure 1D). While maintaining a slight tug on the system, the right-sided disc is unsheathed/deployed, allowing the device to fully bracket the PFO.

The position and seal of the device are confirmed by two-dimensional and color Doppler ICE imaging in the short- and long-axis views. Device-specific securing mechanisms are then applied (tug test for Amplatzer and loop locking for Cardioform), and further evaluation with ICE is performed (Figure 1E and 1F). When satisfactory position, stability, and seal are ensured, the device is released under ICE and fluoroscopic guidance. The procedure is concluded by a final ICE survey with a clockwise sweep of the probe, starting at the home view to rule out pericardial effusion. Hemostasis can be achieved with a figure-of-eight 0 silk suture and additional manual pressure for 5 minutes. 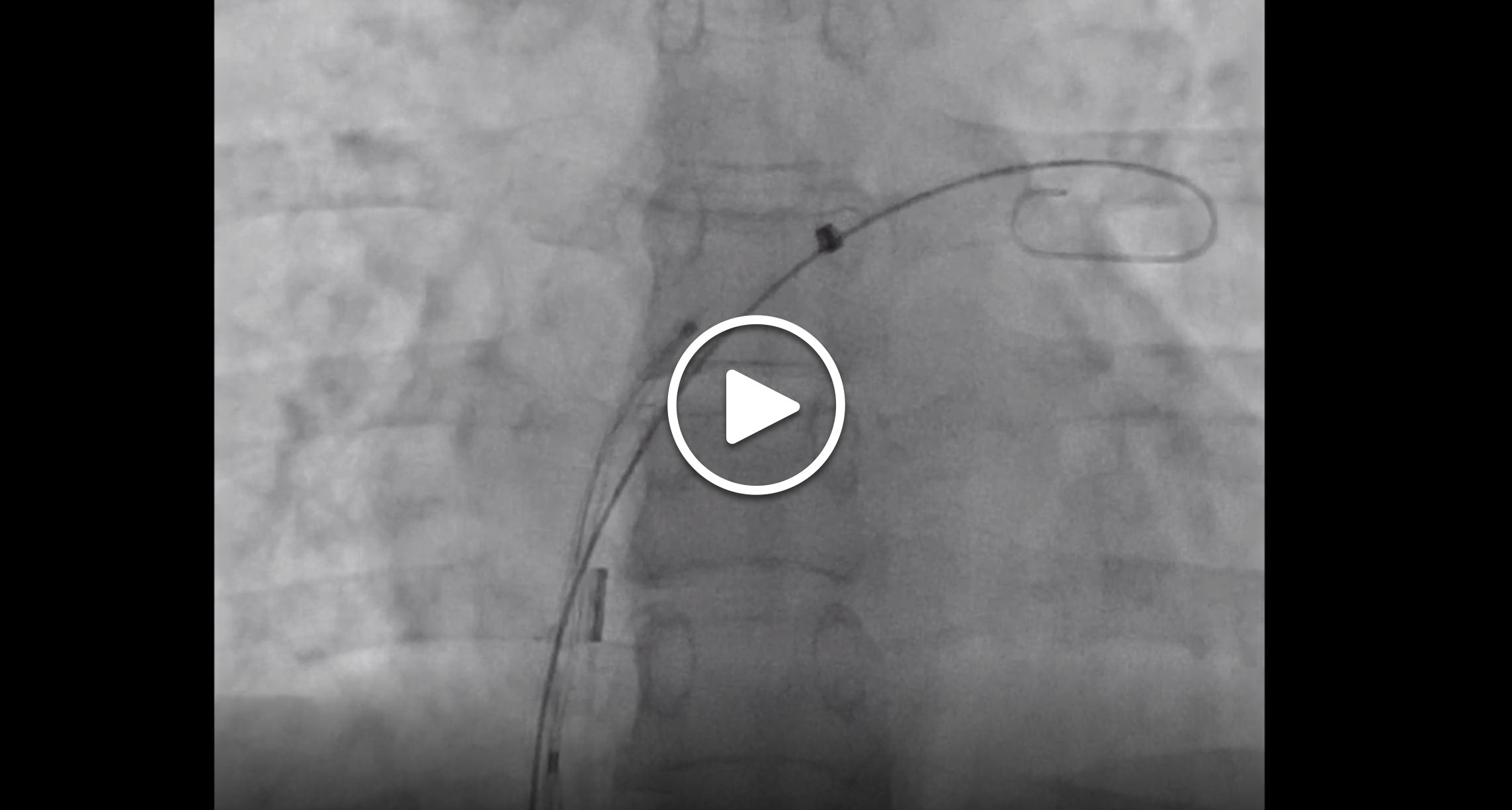 The PFO closure procedure is associated with excellent safety using either TEE or ICE guidance.1,6 However, it is important to understand the uncommon complications that are specific to ICE-guided procedures. First, advancement of the ICE catheter through the iliac veins and inferior vena cava can lead to vascular damage. Resistance while advancing the probe or sudden abdominal pain during the procedure should be further investigated with a venogram to rule out a major vascular complication. Second, manipulation of the ICE catheter can often induce premature atrial or ventricular contractions or transient complete heart block, which are usually self-limiting and resolve with correction of the catheter position. Third, although ICE use can theoretically lead to more vascular complications (additional venous puncture) and pericardial effusion, the risk of these complications with ICE-guided PFO closure is very small.6 In addition, ICE transducers have great resolution that allows early detection of pericardial effusion or cardiac tamponade.11 Fourth, it is possible that inadvertent interactions between the ICE probe and the closure device can lead to device embolization. However, in a large series of ICE-guided PFO closures, this complication was extremely rare/unreported.12