Vascular access site complications from percutaneous cardiac interventions—including percutaneous coronary intervention (PCI), structural heart procedures, and electrophysiology—remain a significant cause of morbidity and mortality.1-3 The transition from femoral to radial artery access has reduced the frequency of vascular complications in the field of PCI; however, the emergence of percutaneous structural heart and aortic interventions that often necessitate large-bore vascular access (> 12 F) has been associated with a renewed focus on avoiding and managing access site complications. In particular, the development of transcatheter aortic valve implantation (TAVI), percutaneous mechanical circulatory support, endovascular aortic repair, and thoracic endovascular aortic repair have heralded a new era in which preprocedural multislice CT assessment of access site dimensions and calcification, ultrasound-guided puncture, and large-bore vascular closure are commonplace. In this article, we provide an overview of the current landscape of devices and techniques used for vascular closure in the setting of structural heart procedures.

THE IMPACT OF VASCULAR COMPLICATIONS AND BLEEDING

Transfemoral vascular access is the default strategy for TAVI, and it is currently expanding toward more challenging patient anatomies due to the development of lower-profile devices, expandable sheaths, and other innovative techniques such as intravascular lithotripsy.4 Compared with more invasive alternative access strategies, such as transapical or transaortic access, transfemoral procedures are associated with lower early and late mortality, lower bleeding rates, shorter hospital stays, and reduced resource utilization.3 Despite these advantages, vascular complications still occur and are associated with increased rates of acute kidney injury, blood transfusion, and 30-day and 1-year mortality in patients who undergo TAVI. In the PARTNER I trial, a fourfold increase in 30-day mortality was observed among patients with major vascular complications.2 Moreover, a retrospective analysis of 17,672 patients undergoing large-bore arterial access between 2012 and 2013 reported a nearly threefold higher risk of mortality (adjusted odds ratio, 2.7; 95% confidence interval, 2.27–3.22; P < .001), a longer hospital stay (7 vs 2 days), and a 60% increase in hospital costs in patients with vascular or bleeding events compared with those without.1 Taken together, these data clearly demonstrate the impact of bleeding and vascular complications and the importance of avoidance strategies to reduce the frequency of these events. 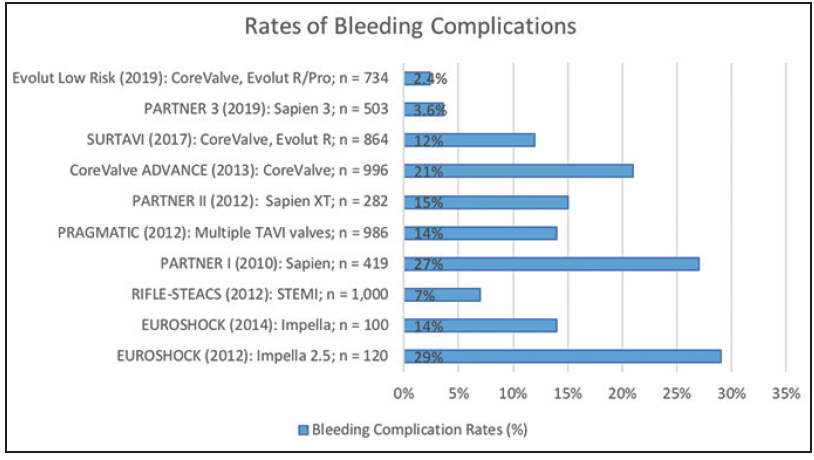 VCDs were first developed in the 1990s in response to high rates of complications and bleeding from femoral access in patients undergoing PCI. In the early 1990s, ≤ 6% of patients undergoing PCI had major vascular complications, of whom 21% to 38% required vascular surgical repair and 22% to 25% required a blood transfusion.19,20 Closure devices used in this space are composed of a variety of methods and materials to close the 5- to 8-F arteriotomy, including suture alone, extravascular collagen plug, or combinations of these techniques. The requirement for VCDs capable of closing arteriotomies created by 12- to 24-F sheaths has seen the successful adaptation of suture-mediated devices and, more recently, the emergence of novel large-bore plug- and patch-based closure systems. 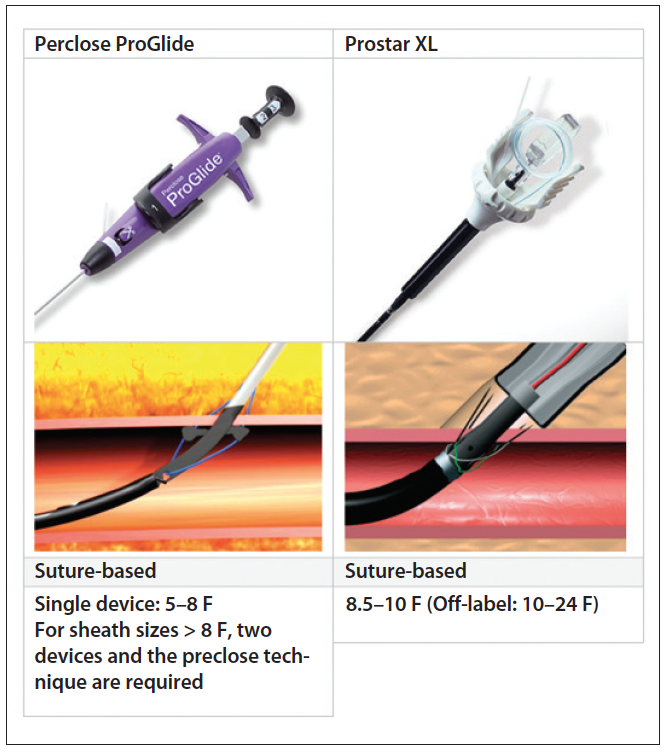 The Prostar XL percutaneous vascular closure system is a 10-F suture-based device that is licensed to close arteriotomy sites between 8.5 and 10 F but is used off-label for arteriotomies between 10 and 24 F. Deployed prior to insertion of a large sheath (preclosure technique), the Prostar device deploys two pairs of suture needles around the arteriotomy. It leaves two polyester sutures that are manually tied and, upon removal of the sheath, advanced to the adventitia of the vessel wall.

The Prostar XL is more cumbersome and has become less frequently used in recent years because there is a relatively long learning curve and recent data suggest an increased risk of complications.22 In 2015, Barbash et al performed a multicenter retrospective study comparing outcomes with Prostar XL and Perclose ProGlide in propensity score–matched patients undergoing transfemoral TAVI. When compared with Perclose ProGlide, the Prostar XL was associated with higher rates of major vascular complications (7.4% vs 1.9%; P < .001), acute kidney injury (17.6% vs 4.4%; P < .001), and longer hospital stay (median, 6 vs 5 days; P = .007).22

Although these fully percutaneous suture-based techniques are the current standard of care, they remain technically demanding for inexperienced operators and are time consuming. Additionally, failure of vascular closure with this technique is not infrequent (1%–8%).22,24,25

Manta. Available in 14- and 18-F sizes, a single Manta VCD (Teleflex) effectively closes femoral arterial access sites after the use of sheaths ranging from 12- to 25-F outer diameters (Figure 3). The system is composed of an 8-F depth locator that denotes the depth of the artery prior to large sheath insertion, the dedicated Manta sheath, and a delivery unit, which consists of an intra-arterial bioresorbable polymer (polylactic-co-glycolic acid) anchor, an extravascular hemostatic bovine collagen pad, a connecting nonresorbable polyester suture, and a stainless steel radiopaque lock. The same guidewire is used to first advance the 8-F depth locator and then the large-bore delivery sheath, avoiding multiple wire passages, which can be an advantage in tortuous vascular anatomy or in the setting of upstream arterial dissection. Hemostasis is achieved by the mechanical sandwiching of the arteriotomy between the anchor and the procoagulant collagen pad. The system is resorbable within 6 months, with the exception of the radiopaque lock and connecting suture. Closure is performed with an activated clotting time of < 250 seconds and systolic blood pressure < 180 mm Hg. The 18-F Manta device is compatible for use in vessels ≥ 6 mm, and the 14-F Manta device is compatible for use in vessels ≥ 5 mm.

The Manta device received premarket approval from the FDA in February 2019 after publication of the SAFE MANTA investigational device exemption clinical trial, a prospective, multicenter, single-arm trial of purpose-designed large-bore femoral access site closure. In this 263-patient open-label study, major vascular complications occurred in 5.3% of patients, with a high rate of technical success (97.7%). The median time from deployment to hemostasis was 24 seconds.26 To date, there are no randomized studies comparing Manta with a suture-mediated closure device, yet small single-center studies, including one propensity score–matched analysis, have suggested fewer vascular complications with the Manta system.25,27 However, one case report of embolization of a Manta device has been reported.28 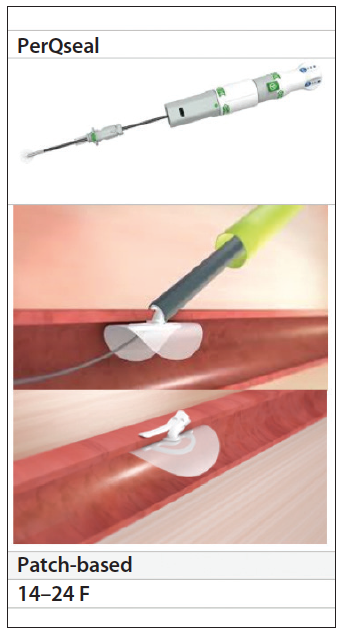 PerQseal. PerQseal (Vivasure Medical Limited) is a percutaneous fully bioabsorbable synthetic VCD that is available in two sizes (small and large) and approved in Europe for closure of arteriotomies from 14- to 24-F (Figure 4). PerQseal does not yet have FDA approval. The system is composed of an introducer sheath that is inserted at the end of the case, a delivery device, and a low-profile synthetic patch with a textured abluminal surface that seals the vessel, internally promoting vessel healing, and is fully reabsorbed within 180 days. The safety and efficacy of the PerQseal device has been evaluated in the FRONTIER clinical program, which recently culminated in the presentation of the FRONTIER IV results. This open-label study of 76 patients undergoing TAVI or endovascular aortic repair reported technical success in 96% of patients, an 8% rate of minor device-related complications, and no major vascular complications.29

InSeal. The InSeal VCD (InSeal Medical Ltd.) is CE Mark approved for the closure of arteriotomies created by 14- to 25-F sheaths (Figure 5). InSeal does not yet have FDA approval. The device is deployed through the large-bore sheath used during the procedure. The device seals the artery internally with a biodegradable membrane kept in contact with the vessel wall by a self-expanding nitinol frame. The closure element is composed of a self-expanding nitinol frame (length, 22 mm; width, 100 μm), an internal L-lactide/caprolactone biodegradable membrane supported by the nitinol frame, and a bioresorbable polyglycolic acid tether. The biodegradable membrane is fully reabsorbed within 6 months. Although early feasibility data were encouraging,30 further safety and efficacy data have not been published to date.

Suture-based closure with the Perclose ProGlide system remains the standard of care in 2019. However, the dedicated closure devices, Manta and PerQseal in particular, are gaining popularity. Widespread adoption of these devices is limited by several factors, including the availability of the device in specific geographies, the elevated cost compared with Perclose ProGlide, and the absence of comparative efficacy studies demonstrating clinical benefit compared with foundation devices.

Vascular and bleeding complications continue to pose challenges for clinicians who are involved in a variety of structural heart and aortic repair procedures. Novel VCDs have the potential to reduce these complications, facilitate expedited patient mobilization, and reduce procedure time. Comparative safety and efficacy studies are required to demonstrate superiority compared with suture-based closure.