Radial artery access for cardiovascular diagnostics and intervention represents a breakthrough in modern interventional cardiology. The main advantages of utilizing the radial artery over the femoral artery are the smaller caliber of the artery and an easier position for safe compression with a reduced risk of major access site bleeding, which may negatively impact prognosis. For this reason, routine implementation of radial artery access, especially with concomitant use of potent antithrombotic agents, has been demonstrated to reduce both access site bleeding and all-cause mortality.1,2 Owing to the superficial position and ease of compression, radial access complications are rare, making access site management after intervention easier compared with femoral access.3 Additionally, the radial artery is too small to be closed with intravascular closure devices and it is exclusively managed with mechanical compression. Yet, despite being safe in most cases, radial artery catheterization has been shown to be almost invariantly associated with acute wall injuries, including radial artery acute dissection, pseudoaneurysm, and thrombus formation.4

Most importantly, radial artery catheterization has a considerable rate of acute and late radial artery occlusion (RAO), which occurs in up to 10% to 12% of cases.5 Although RAO is clinically silent in most cases, it precludes use of the radial artery for future interventions from the same access site, prevents radial harvesting for coronary artery bypass grafting, and may impede arteriovenous fistula preparation in cases of hemodialysis.6 In addition, RAO may limit the use of a ipsilateral forearm vascular access site (eg, ulnar artery) due to a perceived risk of hand ischemia.7 As such, RAO prevention has been central in the development of the radial artery technique, and appropriate radial artery hemostasis has been demonstrated to be closely associated with this outcome. Therefore, the central objective of radial artery hemostasis, apart from preventing bleeding from the access site, is the prevention of RAO. A series of strategies have been shown to reduce the risk of RAO after intervention (Table 1)4,8-14 and most can be achieved with proper hemostasis practices.15 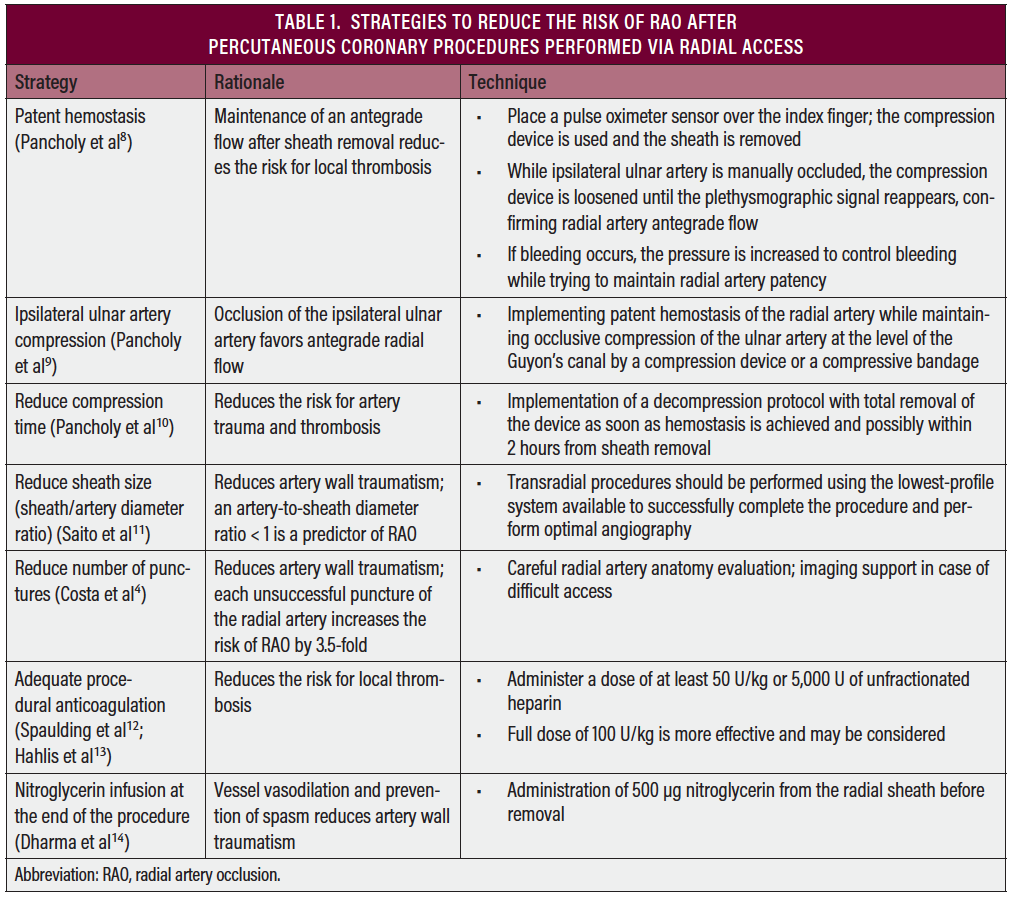 Since its introduction in 1989, radial artery access closure has been managed with manual or elastic bandage compression; however, these options are suboptimal because manual compression is time and personnel consuming, and elastic bandage compression does not allow for complete control of hemostasis.16 For this reason, a number of dedicated compression devices, most in the form of wristbands exerting a controlled and adjustable compression to the radial artery, have been developed for use after sheath removal (Table 2). Although these devices all basically exert a continuous pressure to the artery to allow hemostasis, the different designs and technologies applied for compression have specific advantages and disadvantages linked to the device complexity, cost, and patient comfort. 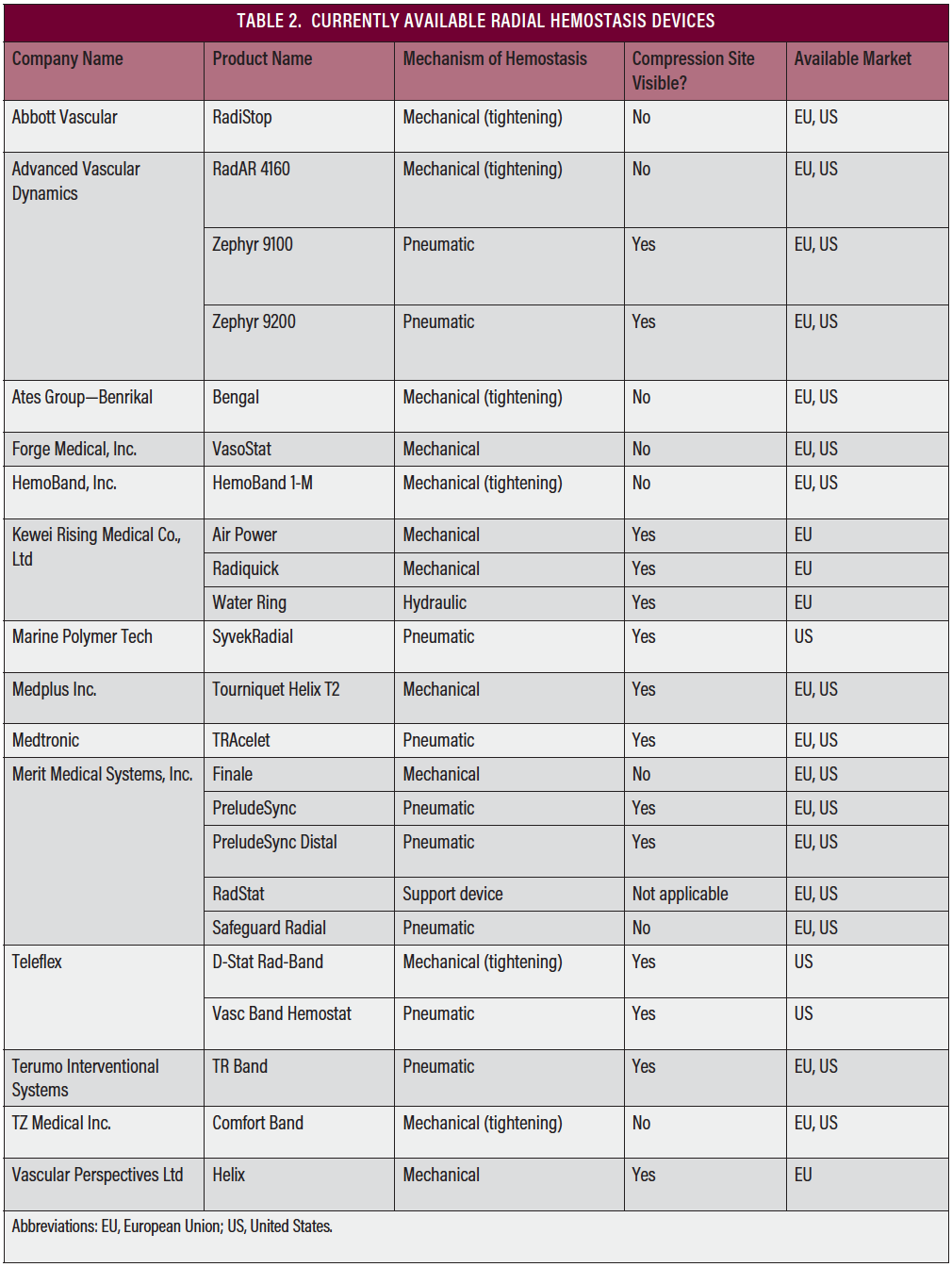 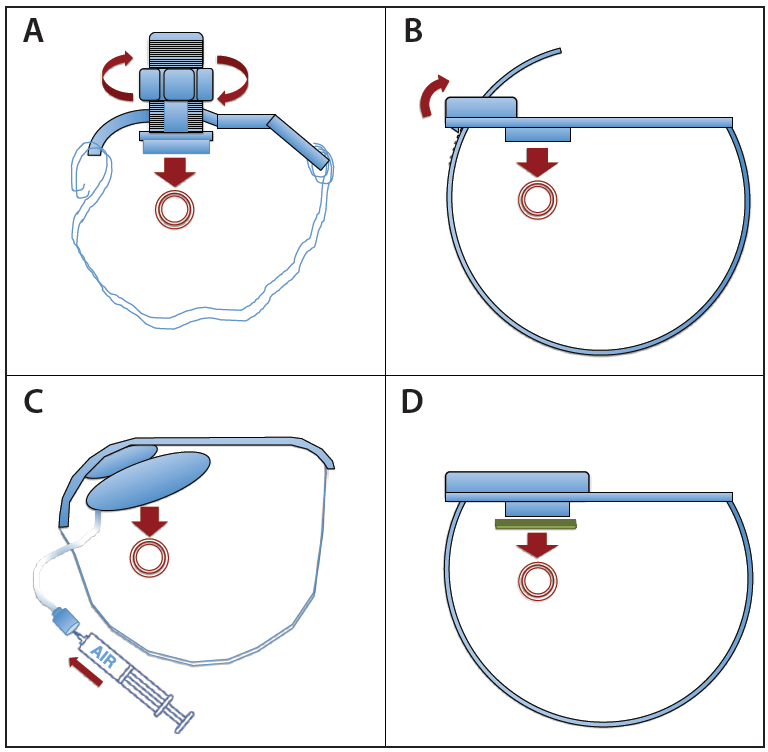 The main design of compression devices include (1) tourniquet, screw-based compression of a hard surface toward the radial artery; (2) mechanical compression obtained by the adjustable size of the wristband that closes up, which augments the local compression to the radial artery; or (3) localized compression of an air-inflatable bladder included in the wristband that can adjust the amount of pressure exerted on the radial artery by regulating the amount of air introduced in the system (Figure 1). Other important characteristics to be considered in the design of these devices are the opportunity to directly see the puncture site through a transparent observation window or the presence of wrist support to prevent flexing movements of the wrist.

To date, the most commonly used radial compression devices implement pneumatic compression. Yet, several trials have compared the safety and efficacy of various compression devices with different results. In a randomized comparison of 709 patients undergoing transradial coronary procedures, an inflatable compression device (TR Band) and a mechanical strap-based compression device with rigid wrist support (RadiStop, Abbott Vascular) were compared.18 No difference in early or late RAO was observed between the two devices. Although the time to achieve hemostasis was slightly longer with the TR Band system, the rate of discomfort and pain was higher with the RadiStop device.18

The choice of optimal hemostasis method after a radial access intervention may be dependent on the level of familiarity that the catheterization lab staff has with specific devices, even though no difference in the effectiveness of radial compression devices has been demonstrated. With the many available hemostasis devices, clinicians have the opportunity to implement best practices associated with RAO prevention, especially with regard to patent hemostasis.