Keeping abreast of cardiology compensation trends and production data supports physicians and administrators in making informed business decisions. This crucial information also helps leaders benchmark whether their practice or program offerings and employment agreements are aligned with other organizations.

For each of the last 7 years, MedAxiom has been collecting and analyzing an array of compensation, productivity, financial, and staffing metrics from its membership, delivering an annual Cardiovascular Provider Compensation and Production Survey report. The data are submitted by cardiovascular programs each spring and compiled into more than 800 measures for analysis.

This article provides key findings from the 2019 survey (based on 2018 data) that are most relevant to interventionalists. The results include responses from 184 groups, representing 2,267 full-time cardiovascular physicians. The median size of the responding groups was 13 full-time equivalent (FTE) physicians. Data from 146 part-time physicians were also used in some of the findings; however, the figures in this article have been filtered to only include full-time physicians.

CARDIOLOGY COMPENSATION IS UP, AGAIN 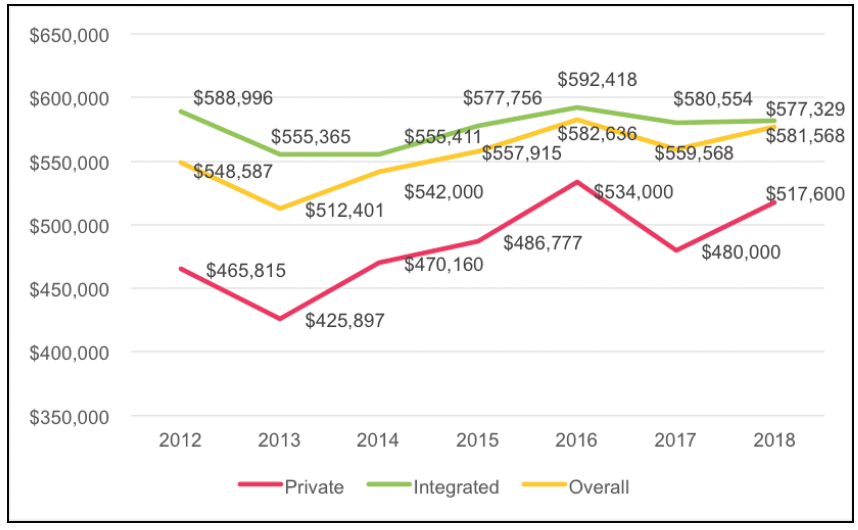 THE INCOME GAP BETWEEN PRIVATE AND INTEGRATED PHYSICIANS HAS NARROWED

Although both private and integrated physicians saw an increase, the gap between the two cohorts closed to one of its lowest levels (11%) since the integration wave of cardiology began in 2008 (Figure 2). In terms of real dollars, private cardiologists earn just under $65,000 less per FTE than their peers in integrated settings (hospital or health system employment or lease). Although this gap is significant, it has narrowed by half since its peak in 2013 of nearly $130,000 per FTE.

Contributing to this gap closure is the fact that cardiologists in private groups saw their compensation increase by 8%, but employed cardiologists experienced only a slight increase over the last year. Although this latter fact may be due to some level of survey bias (such as the number of respondents or which groups responded this year versus last year, etc), it is clear that private groups are seeking innovative, new revenue streams. Primarily, these are coming from hospital contracts. Our knowledge from the field indicates that private groups are successfully securing contracts for call, comanagement, directorships, or other payments. But, we also see them branching beyond medical services and procedures into retail sales of pharmacy products, dietary resources, and other products. The combination of these revenue streams has been so effective that for 2018, the gap between integrated and private physician total compensation has narrowed to just 3.5%, the lowest MedAxiom has ever reported.

So why is cardiology pay still increasing? A big factor is supply and demand. Data from 2018 indicate that, overall, one in four (26.5%) cardiologists are > 61 years. Although this age doesn’t necessarily indicate imminent retirement, it does suggest a section of the workforce that will likely slow down and/or discontinue practicing within the next several years. 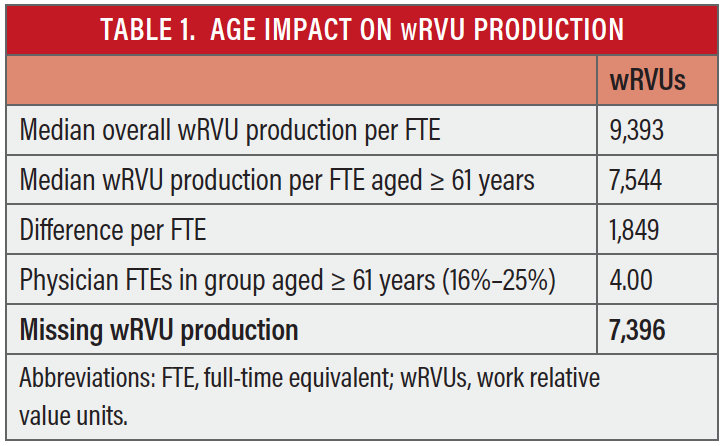 Corroborating this theory is a report released by the Association of American Medical Colleges.1 This research shows that the United States will experience a shortage of 46,900 to 121,900 physicians in all specialties by 2032. More than one-third of this paucity will be in primary care, the expected relief valve for chronic disease management, which includes several cardiovascular conditions.

As measured by the wRVU, overall cardiology production has remained stable over the past 5 years, with 2018 median wRVU production at nearly the exact same level reported in 2013. Private cardiologists continue to outpace those in integrated models in terms of overall wRVU production levels, with each cohort following the same trending patterns (Figure 3). Although the production gap between private and integrated cardiologists has varied over the years, it has hovered around a 10% differential—synching up very closely with the total compensation difference of 11%. 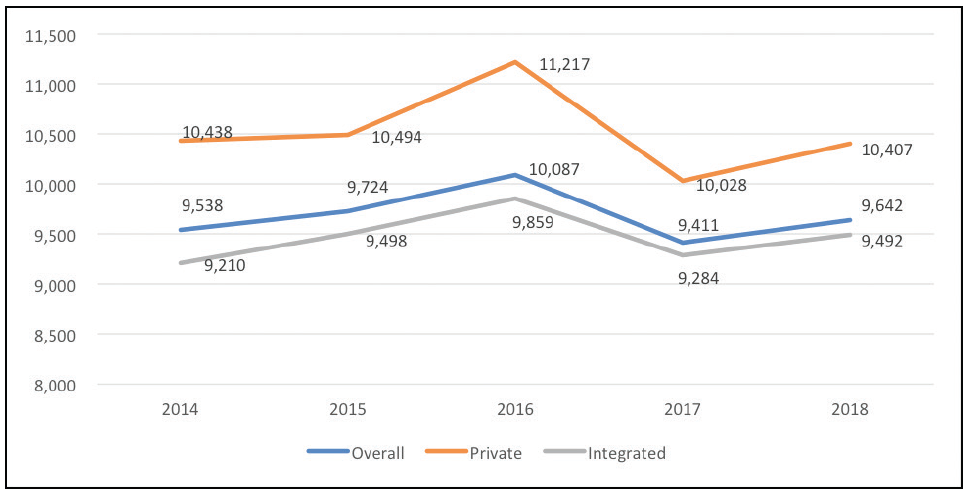 The differences in production levels between the ownership cohorts can be partly explained by their respective subspecialty mixes. The 2019 survey data indicate that nearly half (46%) of the physicians in private groups are interventional. When you add EP, another procedure-heavy subspecialty, that ratio increases to nearly 60%. By contrast, these two subspecialties represent less than half of physicians in integrated groups. EP and interventional top the wRVU production pyramid, helping to explain the private group production advantage. EP continues to produce the most median wRVUs per FTE physician (11,696 per FTE), with interventional cardiologists in second (10,537 wRVUs per FTE).

NEW PATIENT VOLUMES INCREASED FOR A SECOND YEAR IN A ROW

After several years of dormancy, new patient volumes in the cardiology practice have increased for 2 consecutive years, reaching nearly 600 new patients per FTE physician according to the 2019 survey data (Figure 4). Most of this growth is coming from expanding ambulatory volumes. During this same time period, inpatient new patient volumes have remained very static. In general, hospital work for cardiologists is either flat or declining, as demonstrated by the volume of discharges performed. Our field knowledge and conversations with members indicate that cardiologists are increasingly moving to a purely consultative role in the inpatient setting.

The data in Figure 5 clearly illustrate the continued trend of cardiologists integrating with hospitals and health systems. Although there have been some recent (and often high-profile) examples of cardiologists leaving an integrated model, these occurrences are still very rare. In fact, the percentage of groups in an integrated model increased again in 2018, reaching the highest level ever at 83%. Despite a lot of discussion around the topic of “dis-integration,” as it is often called, the number of cardiologists who reside within a hospital or health system through either employment or a professional services agreement continues to rise. 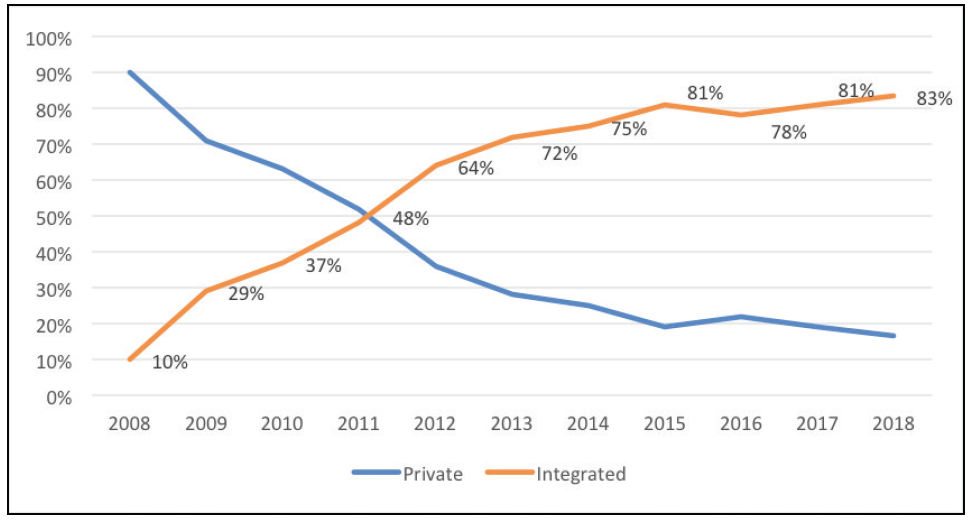 Given emerging payment models, the transition of more invasive care to the ambulatory setting and/or the impact of nontraditional players such as Amazon or Apple on health care, it is possible that we may see a reversal of this trend in the future. However, at the moment, the integrated model remains the organizational reality for the majority of United States cardiologists.

Increasing compensation for interventional cardiologists, combined with the steady pace of productivity in procedure-focused subspecialties, represents an interesting challenge as reimbursement models evolve toward value-based care and bundled payments. Today, invasive physicians are reimbursed more for procedures than for seeing patients in a clinical setting. However, in bundled payments and risk-sharing agreements that promote wellness and disease management, that gets reversed.

The data clearly show a long-term trend of declining cath lab utilization. However, the ratio of percutaneous coronary interventions to caths has increased. The most likely explanation is that improved noninvasive diagnostic imaging techniques have reduced the need for invasive diagnostic cath lab procedures—particularly in lower-risk patients. Accordingly, patients who make it to the cath lab today are higher risk and more likely to require intervention. With continued improvement in noninvasive diagnostics, increased specialization, and improved efficiencies in the cath lab, the role of the invasive, noninterventional cardiologist is changing in some markets. This may have implications for practice compensation models as organizations transition to meet the needs of new payment models.

Furthermore, as the role of noninterventional physicians increases to handle the demand of high-acuity chronic disease management, such as HF, one would expect there to be a future impact on compensation. New technologies will certainly play a role as well and will affect who does what in the clinical setting. For instance, many, including American College of Cardiology Chief Innovation Officer John S. Rumsfeld, MD, PhD, and coauthors are predicting that artificial intelligence will soon be able to accurately interpret many imaging studies.2 Anticipating these transitions in compensation models, particularly those lasting years as part of an employment agreement, will become paramount.

Questions such as these are a microcosm of the broader complexities in compensation models and an indication of how fee-for-service models are changing. The answer is not if organizations should begin discussing how to evolve their compensation agreements but how. As the economics move toward value-based payments, physicians and administrators must migrate incentive plans away from wRVUs to a system that rewards the entire clinical team for overall outcomes instead of for individual procedures and services.