An overview of our technique for left radial access, with a discussion of the benefits and limitations.

For the left radial approach, some adjustments in technique are needed to compensate for ergonomic challenges for both the operator and patient. Difficulty of left-hand pronation has led to the distal radial approach. For instance, the anatomic snuffbox approach, pioneered by Dr. Ferdinand Kiemeneij, involves a catheter inserted distally into the hand between the patient’s thumb and first finger. This has led to improved patient and operator comfort.11 Other left radial artery techniques involve the left arm draped over the abdomen and supported by a Cobra board (TZ Medical Inc.).12 This article describes an approach for a left radial technique and positioning for diagnostic catheterizations, coronary interventions, and rapid treatment of ST-segment elevation myocardial infarctions in which the patient’s left arm is abducted out 90° from the body. 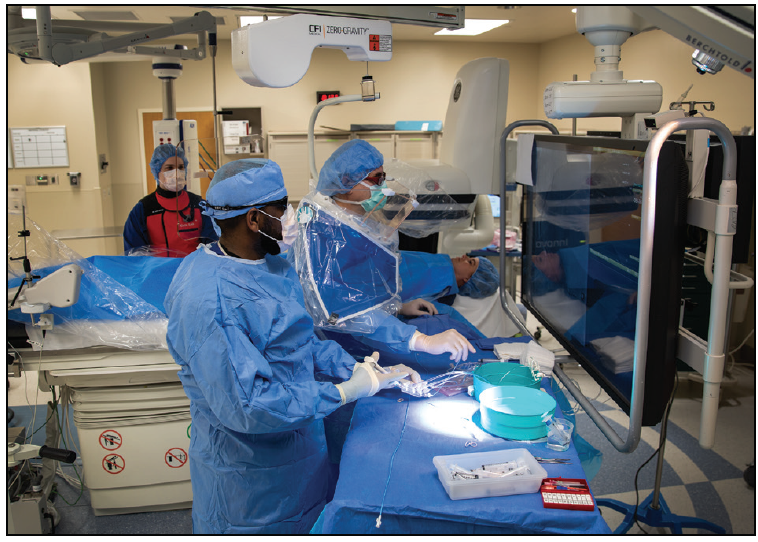 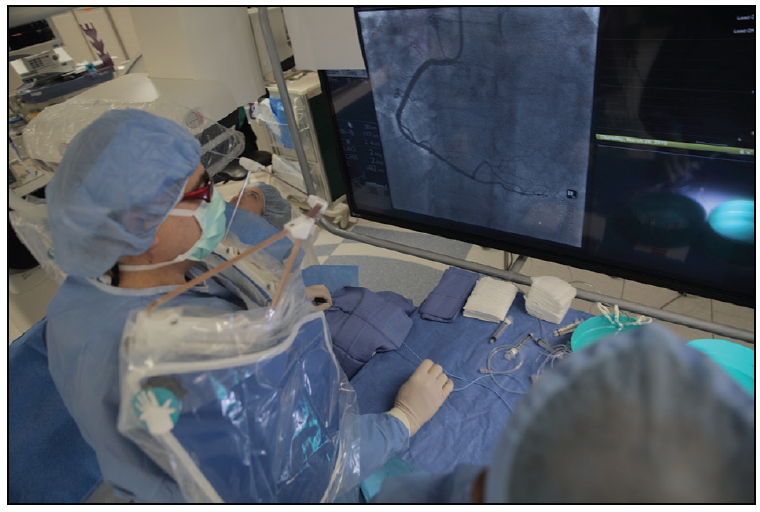 Figure 2. The operator has excellent ergonomics during the procedure without back strain and torsion. The monitor screen is a short distance from the operator.

The left radial artery access technique involves conventional placement of the patient on the catheterization laboratory table. The left arm is abducted 90° from the body and the hand is laid prone (Figure 1). A preparation table of similar height is positioned distal to the arm for preparing balloons, catheters, and stents. This approach emphasizes coaxial movement of catheters to the coronary arteries and left ventricle. The operator stands on the caudal side of the extended left arm. The fluoroscopic and hemodynamic monitors are in front of the operator so that he or she is standing directly in front of the screens. There is no torsion on the operator’s body, and he or she is looking forward at the monitors (Figure 2). 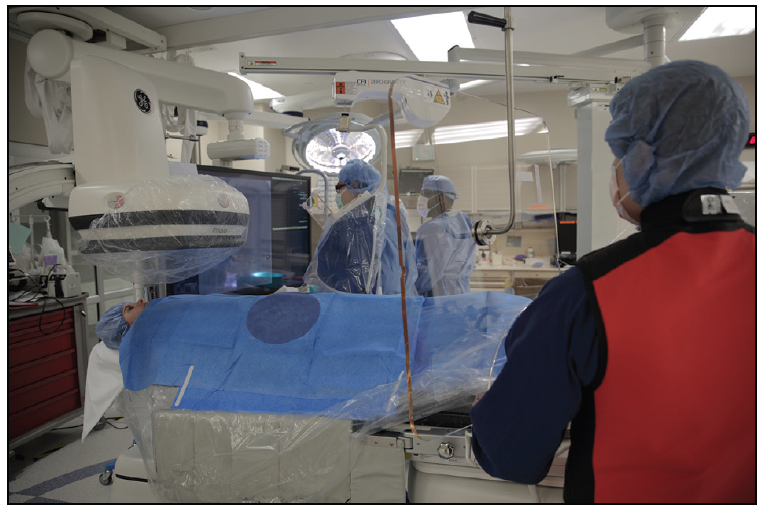 Figure 3. The technician who moves the table is remote from the radiation source and uses a radiation shield.

A catheterization technologist stands on the patient‘s right side and controls the table during the procedure using an additional monitor. A scrub technician stands to the right of the operator and prepares the equipment. One nurse circulates. An additional technician monitors hemodynamics and enters the patient’s chronologic data.

The operator stands behind 800 lb of lead from the Zero-Gravity suspended radiation protection system (Biotronik, Inc.), which also protects the operator’s head from radiation. The catheterization technician assistant also benefits from the Zero-Gravity radiation protection, which is positioned to the left of him or her (Figure 3). Real-time radiation sensors (RaySafe; Unfors RaySafe AB, a Fluke Biomedical company) are employed throughout the case. Access and closure with use of the Vasc Band hemostat (Teleflex) at the access site are accomplished without repositioning the arm.

One limitation of the left radial approach is the requirement of four assistants, which is a manpower limitation in some catheterization laboratories. Alternatively, the left radial extended arm approach can be performed with three technicians if the x-ray controls are positioned on the left side of the table. Additionally, some creative solutions are necessary to have the manifold or assist device reach the extended left arm.

Additionally, the transradial approach may not be the best approach in every cohort of patients. A retrospective study showed decreased patency in radial arteries used for coronary artery bypass grafting that were previously utilized for angiography, as compared with those that had not been utilized during angiography.13 Evidence exists that the radial artery approach has an impact on vasomotor function, medial layer injury as documented by optical coherence imaging, and radial artery diameters postprocedure.14-16 Also, when using the radial artery for catheterization in patients with advanced kidney disease, the treating physician needs to consider the near-future use of that artery for possible creation of an arteriovenous dialysis fistula.17

This article describes a more coaxial way to perform heart catheterization and percutaneous interventions. This approach is supported by the literature, with reports of the left radial approach having fewer complications when compared with a right radial approach.18-22 The left-sided approach also enhances patient and operator comfort. We are unaware of previous reports of the left radial extended arm approach; however, it has been Dr. Fullin’s standard approach for > 4 years.